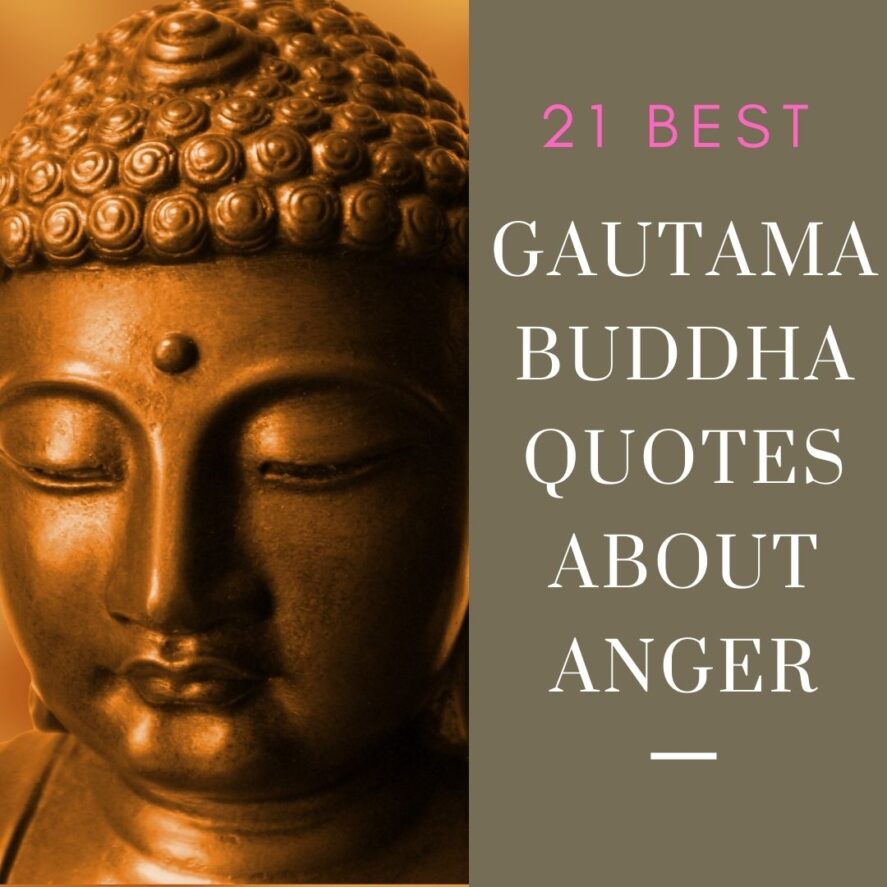 Before we talk about Gautama Buddha Quotes about anger and his soothing and calming words to control anger and be a better person, let us discuss what is anger and causes of it.

It appears that humankind has a real issue with anger. You’ve probably seen examples of it while cruising down the street to work. People appear to become various monsters when hurrying down the interstate highway. People behind the wheels of a vehicle can’t go about handling frustration and anger towards other motorists. Anger management is essential to your well being and security. By handling your anger you may help control the results of different scenarios. You might even offer a fantastic example to your kids and others through serene practices.

Anger aggression can occur for many reasons. Among the most usual is an overall aggravation of some situation which could be out of your hands. For instance a problem on the job. You might be holding back from revealing your emotions toward a bothersome co-worker or even a boss. How frequently have you honked your horn on a fellow motorist for a small mistake while driving? Or it might be teen anger that has you frustrated. You don’t understand how to take care of your child during one of her or his outbursts so that you simply take it out on your own partner.

Anger management is essential for your health. You don’t need this to happen for you. However, there are additional dangers to your well being. The adrenaline might let you spiral out of control and it will influence your blood pressure.

Buddhism teaches that anger is the principal barrier that causes corrosion to compassion and our thoughts. The causes of anger may be distress, disturbance, or being spoken to harshly. An individual can ruin himself by anger and must understand that anger is the enemy and by recognizing that anger only generates sorrows.

Anger and Lack of Empathy or Compassion

There is no doubt that anger is the worst evil, A moment of anger could in a minute burn down an entire woods of values and decent karma. For example, you could become blind with anger and do something which you repent for the rest of your life. That is why we need to be careful, careful, and mindful instead of mindless. Talking of compassion, a beautiful example is the Dalai Lama who bears virtually no hard feelings for the Chinese. Dalai Lama believes and insists that there is no use of developing a hatred for the Chinese. In fact, as he says, it makes more sense, instead, to develop respect and compassion for them.

Sometimes when we are in anger, we may seem really cool, calm, and composed, yet they might be seething inside. It must be seen that our fangs and claws aren’t pointed towards other people, but these jagged weapons could possibly be pointed towards ourselves as it may lead to low self-esteem, self-loathing, and self-hatred. In another words anger harms us the most.  By working on the causes of anger, an individual may feel compassion for the enemy. For example, if somebody speaks harshly to me it means he is not in control of his emotions and cannot be blamed for his actions. His activities are the consequence of upsetting emotions over that he has no control.

Buddhist teachings also state that anger comes out of ignorance. Anger is frequently singled out as the most damaging of our emotions as it leads to aggression and violence. Anger is also one of the emotions that are misunderstood. It is frequently misunderstood in our Buddhist practice, inducing us to suppress it and make ourselves ill, uncomfortable, and off-balance.   Learning how to comprehend the causes of anger originating in addition to the undesirable, damaging outflows of anger along with its own malicious, cousin hate might help strengthen our will to control it. Additionally, recognizing the positive sides of anger, for example, its pointed capability to comprehend what is wrong in scenarios, such as injustice and unfairness, aids our reaction to it and creates constructive answers.

How to Deal with Anger Issues

Anger does not get you everywhere. If you are able to calm your thoughts and be patient, you will be a superb example to people around you. Sometimes the most frightening thing on earth would be to face ourselves. How can we deal with those difficult emotions such as fear and anger when they appear. It is a great thing, to begin with during meditation to analyze ourselves in a less stressful position, beginning first with the small things how emotions arise.

What Gautama Buddha Teaches About  Anger

ANGER WILL NEVER DISAPPEAR SO LONG AS THOUGHTS OF RESENTMENT ARE CHERISHED IN THE MIND!

SUPPOSE AN ENEMY HAS HURT YOU IN HIS OWN DOMAIN, WHY SHOULD YOU ANNOY YOURSELF AND HURT YOUR MIND IN YOUR OWN DOMAIN!

WHEN IT IS IMPOSSIBLE FOR ANGER TO ARISE WITHIN YOU, YOU FIND NO OUTSIDE ENEMIES ANYWHERE !

SO WATCH THE THOUGHT AND ITS WAYS WITH CARE. AND LET IT SPRING FROM LOVE, BORN OUT OF CONCERN FOR ALL BEINGS!

TO CONQUER ONESELF IS A GREATER TASK THAN CONQUERING OTHERS !

THERE ARE THOSE WHO DISCOVER THEY CAN LEAVE BEHIND DESTRUCTIVE REACTIONS AND BECOME PATIENT AS THE EARTH, UNMOVED BY FIRES OF ANGER OR FEAR, UNSHAKEN AS A PILLAR, UNPERTURBED AS A CLEAR AND QUIET POOL!

SPEAK THE TRUTH DO NOT BECOME ANGERED AND GIVE WHEN ASKED, EVEN BE IT A LITTLE. BY THESE THREE CONDITIONS ONE GOES TO THE PRESENCE OF THE GODS !

EVERYTHING IS BASED ON MIND, IS LED BY MIND, IS FASHIONED BY MIND. IF YOU SPEAK AND ACT WITH A POLLUTED MIND, SUFFERING WILL FOLLOW YOU, AS THE WHEELS OF THE OXCART FOLLOW THE FOOTSTEPS OF THE O

DO NOT OVERRATE WHAT YOU HAVE RECEIVED, NOR ENVY OTHERS. HE WHO ENVIES OTHERS DOES NOT OBTAIN PEACE OF MIND!

hOLDING ON TO ANGER IS LIKE DRINKING POISON AND EXPECTING THE OTHER PERSON TO DIE !

IF YOU WISH TO BE GENTLE WITH OTHERS, BE GENTLE FIRST WITH YOURSELF.

“FASHION YOUR LIFE AS A GARLAND OF BEAUTIFUL DEEDS.”

HATRED DOES NOT CEASE BY HATRED, BUT ONLY BY LOVE; THIS IS THE ETERNAL RULE !

HOLDING ON TO ANGER IS LIKE GRASPING A HOT COAL WITH THE INTENT OF THROWING IT AT SOMEONE ELSE; YOU ARE THE ONE WHO GETS BURNED !

TO BE ANGRY IS TO LET OTHER’S MISTAKES PUNISH YOURSELF !

AN OUTSIDE ENEMY EXISTS ONLY IF THERE IS ANGER INSIDE !

HOLDING ON TO ANGER IS LIKE GRASPING A HOT COAL WITH THE INTENT OF THROWING IT AT SOMEONE ELSE; YOU ARE THE ONE WHO GETS BURNED !