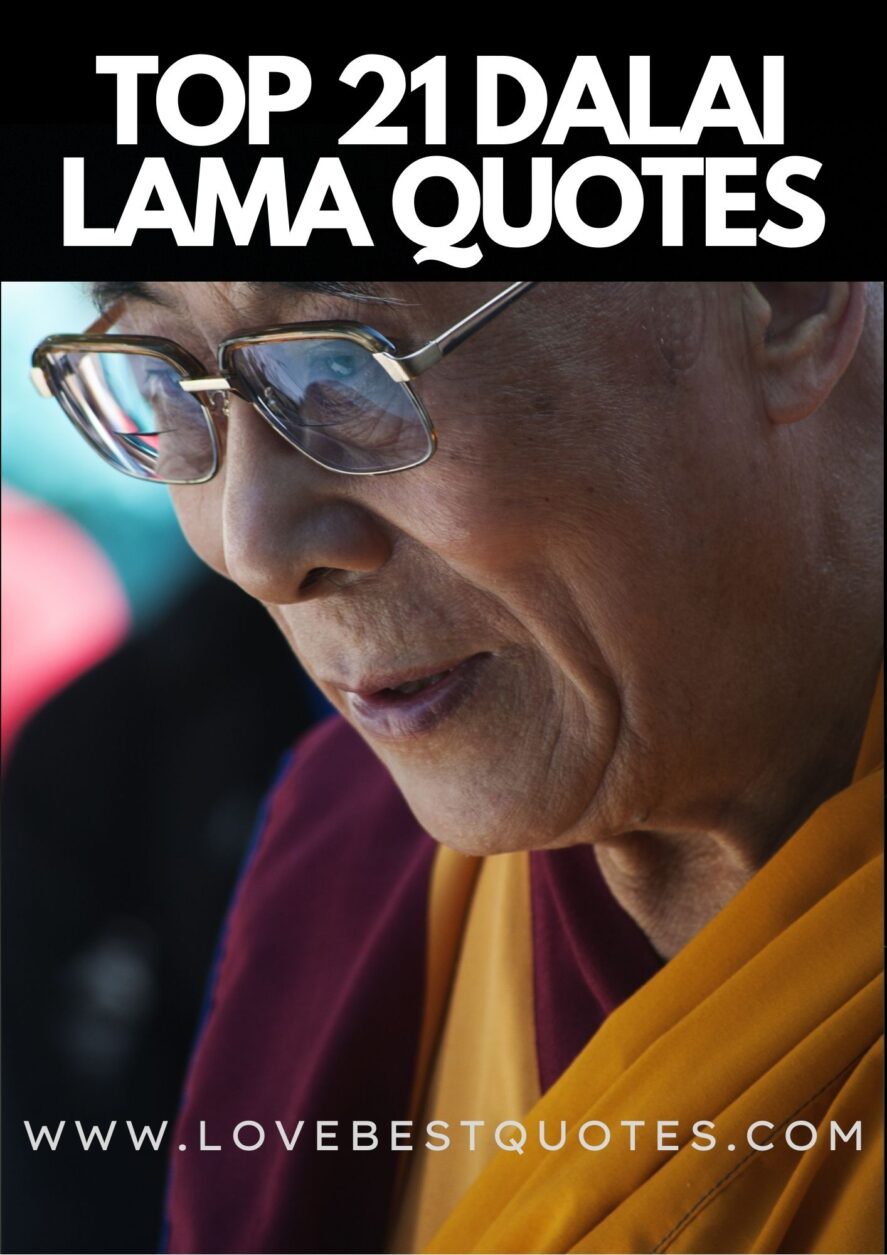 His Holiness the 14th Dalai Lama is a spiritual leader of not only the  Tibetan people but of all those who profess Buddhism, all over the world.  He is also the head of state of Tibetans.   His Holiness is one of the most respected and beloved man who has been promoting the cause of justice, humanity, and freedom.

Is The Dalai Lama a Bodhisattva

For the Tibetans, he is the 14th re-incarnation of Avalokiteshvara, the Boddhisatva of Compassion. In Tibet, it is believed that a Bodhisattva chooses to be reborn repeatedly so that they may be of further service to humankind.   The Dalai Lama is a person who is believed to be the reincarnation of Chenrezig, the patron Saint of Tibet, and Avalokiteshvara the Bodhisattva of Compassion.  It is, therefore, no wonder that the Tibetan people refer to their spiritual and political leader of Tibet as a god-king or a living Buddha and worship him.

The Tibetans also refer to his holiness the Dalai Lama as Yishey Norbu (Wish-Fulfilling Gem or just Kundun  (Presence).  He was born on July 6, 1935, in a village called Pari Takster, in the Amdo region, in North-Eastern Tibet.  When he was just 2 years old, he was officially recognized as the latest reincarnation of the Dalai Lama.   It meant that the young child had to leave his home at an early age for rigorous religious teachings. His teachers, the Monks taught him Sanskrit, Philosophy, Art, and many other subjects.  At the age of 23, he received a degree known as the Geshe Lharampa. This is considered the equivalent of a doctorate in Buddhist philosophy.

Before Communist China occupied Tibet in 1959, the young Dalai Lama ruled and governed an independent country of Tibet, the size of which was equal to Western Europe.  With the 1949 Chinese invasion of his country, His Holiness assumed political power in Tibet.  He asked for only peace and freedom for his people, but this was not to be. There was a brutal crackdown on the Tibetan people by the Chinese government in 1959.  His Holiness the Dalai Lama was just  24 years old, when he had to flee, in disguise, into India days before the Chinese bombed his summer palace in Lhasa, the Tibetan capital.

In India, the Indian Prime Minister Jawaharlal  Nehru granted tracts of land for the homeless leader and the 80,000 Tibetans who had followed him into exile in India.   The Tibetans were grateful for the shelter in India, after facing Mao Tsetung’s brutal repressive troops, however, they continued to suffer in India for some time.  There was a vast change in the climate; from Tibet’s cold, dry high-altitudes to India’s low-lying heat and humidity, it was too much for the Tibetan people.  Thousands of Tibetans fell ill and died from malaria and dysentery.  Their bodies were unable to cope with this extreme change in the climate.   However, under the guidance of His Holiness the Dalai Lama, the Tibetans gradually began to thrive in India.  Today they are one of the world’s few “successful” refugee communities, who have done exceedingly well in life.

The Dalai Lama, throughout the decades of years in exile, has been fighting a David and Goliath battle for Tibetan independence against China. The incomparable dignity and grace of his untiring efforts to promote a peaceful resolution to the problem were rewarded when he won the 1989 Nobel Prize for Peace.

Remarkably, the Dalai Lama bears virtually no hard feelings for the Chinese and has followers from the Chinese people as well.   When asked if he hates the Chinese, he inevitably responds “no, not really,” or “almost not.”   Dalai Lama believes and insists that there is no use of developing a hatred for the Chinese.  In fact, as he says, it makes more sense, instead, to develop respect and compassion for them.

For all the isolation, austerity, premature responsibilities, and suffering he has endured, the Dalai Lama is a remarkably jolly and embittered man.   The Dalai Lama is gifted with a keen sense of humor, and when he laughs his entire body takes part.   The fact that he is able to laugh, in spite of going through some of the worst hardships and adversity that he has experienced during the past several decades, suggests that he is a man who has found inner peace and is today one of the greatest spiritual leaders for peace all over the world.

Ever since then, His Holiness has resided in Dharamsala, in northern India. His philosophy calls for non-violence, rational behavior, compassion, and cooperation. The Dalai Lama has won the Nobel Peace Prize in 1989, which was awarded to him in recognition of his non-violent, peaceful teachings.  It was also in recognition of his  campaign of more than fifty years to end China’s domination of his homeland Tibet in a non voilent and peaceful manner.

His Holiness the Dalai Lama travels all around the globe spreading his message of compassion, love, peace and  non voilence. Here are some of the best Dalai Lama Quotes that will inspire you and bring peace within you. 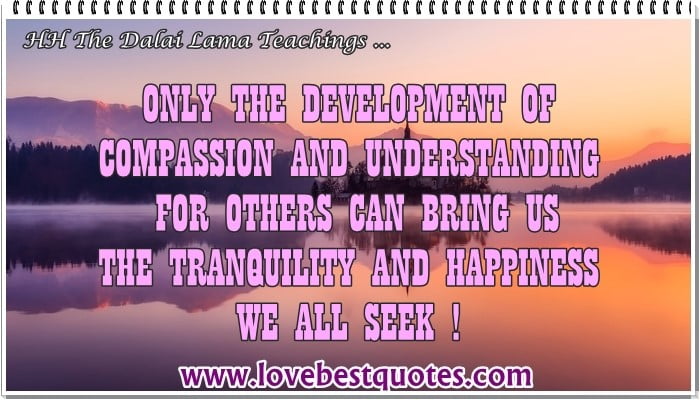 Only the development of

for others can bring us

the tranquility and happiness

To conquer oneself is

a greater victory than

to conquer thousands in a battle! 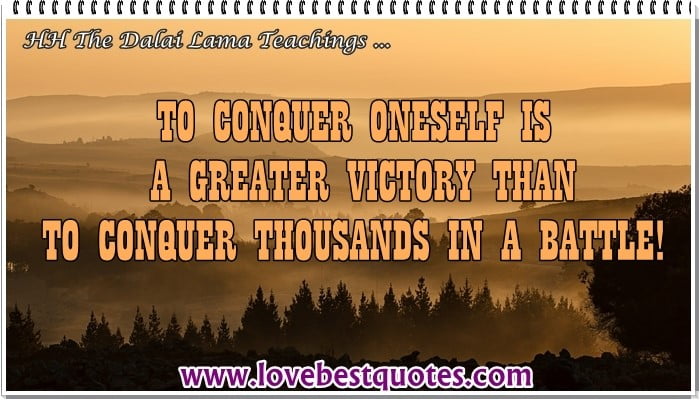 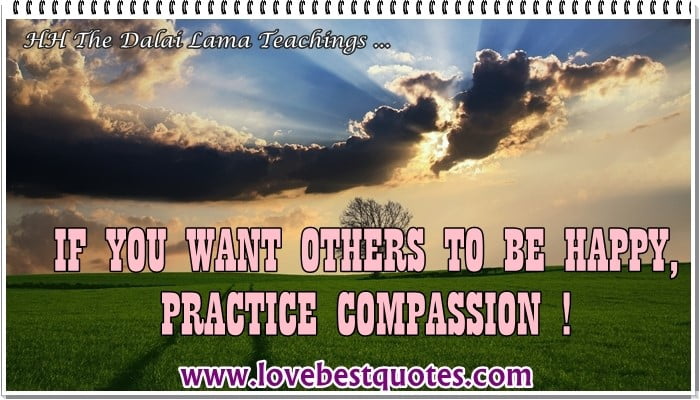 If you want others to be happy,

Happiness is not something

ready made ! It comes

from your own actions ! 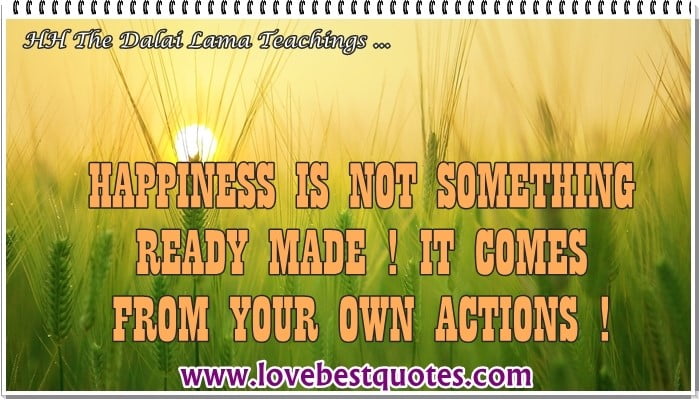 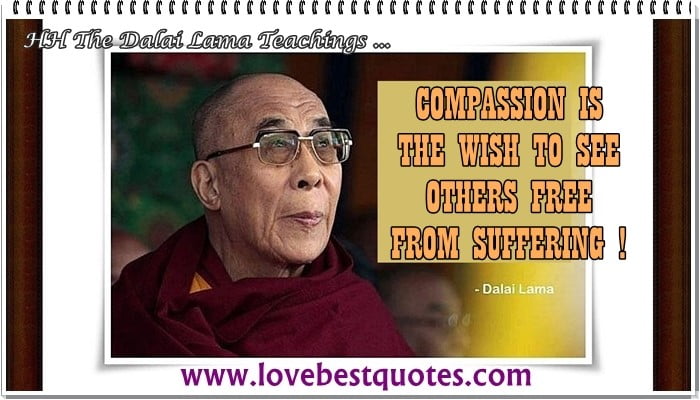 Compassion is the wish

to see others free

toward others does not change

even if they behave negatively or hurt you ! 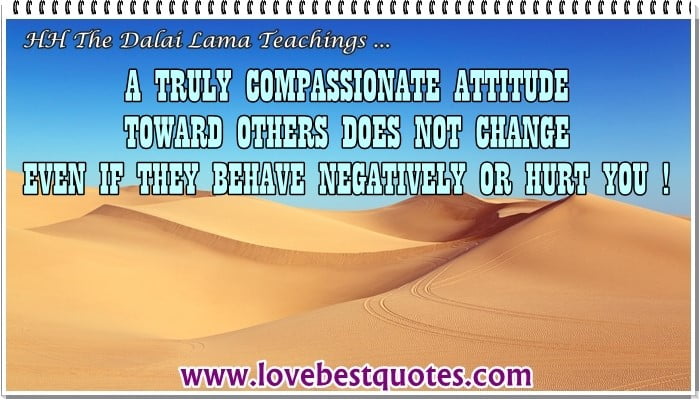 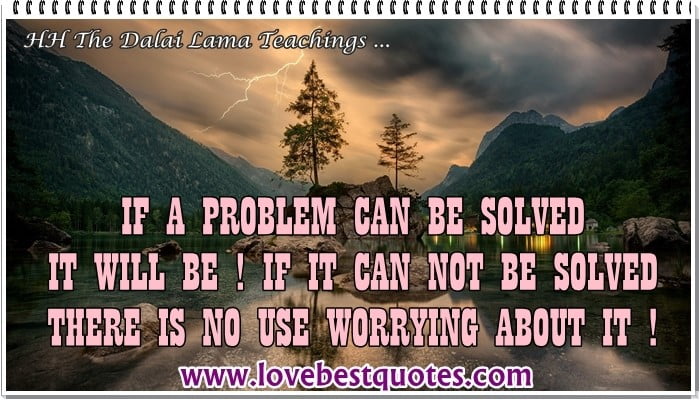 If a problem can be solved

it will be ! If it can not be solved

there is no use worrying about it !

There is no need for temples;

no need for complicated philosophy !

Our own brain, our own heart

is our temple; the philosophy is kindness ! 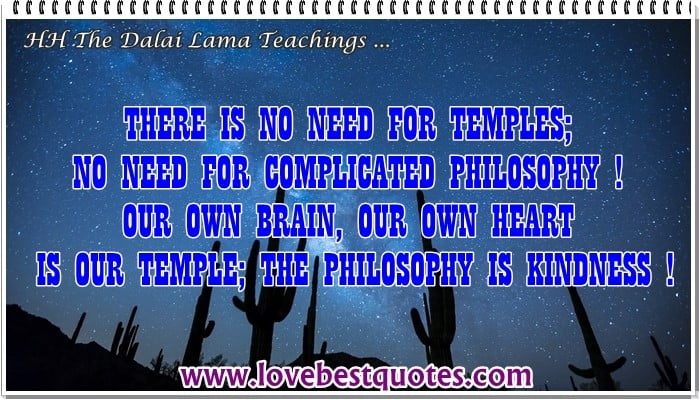