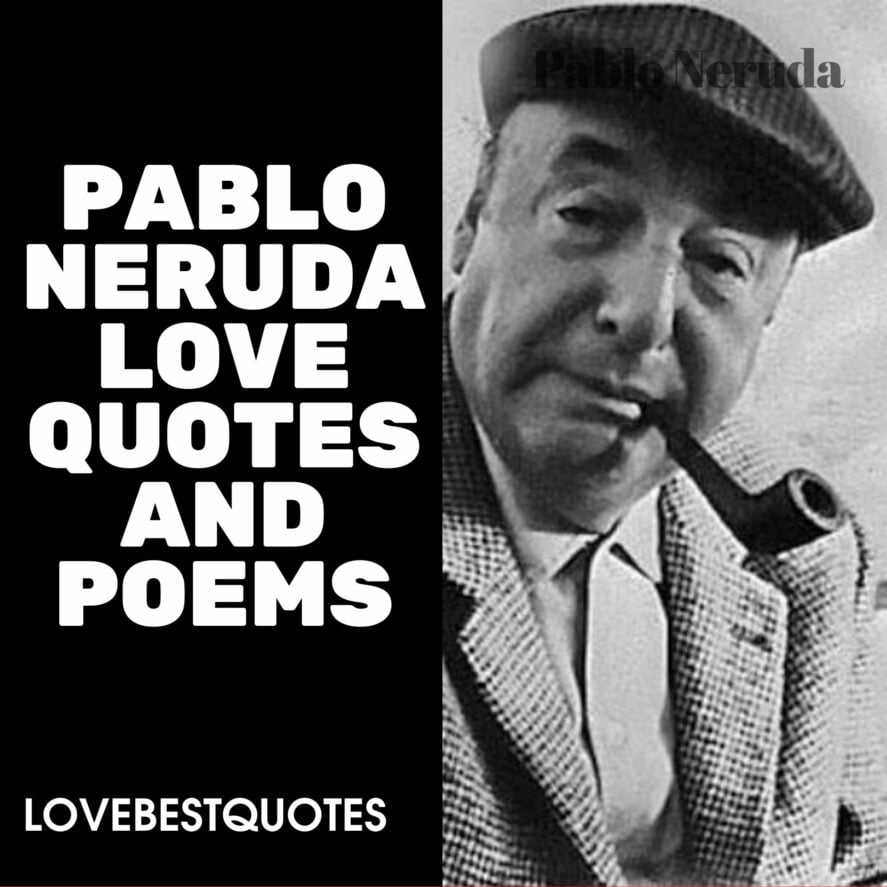 1. Pablo Neruda, Nobel Laureate, was one of many twentieth century poets in Chile and was called “the greatest poet of the twentieth century in any language by Columbian novelist Gabriel Garcia Marquez. His life is full of adventure and intrigue and all of these aspects are detailed throughout his poems.

2. Neruda was born on 12 Jul 1904, as Ricardo Eliecer Neftali Reyes Basoalto in Parral, Chile. on July 12, 1904. His father Jose del Carmen Reyes Morales was a railway employee and his mother Rosa Neftali Basoalto Opazo was a school teacher. Neruda lost his mother just two months after he was born. His father immediately moved to Temuco and remarried. Neruda also had an illegitimate brother and half-sister.

3. Neruda became a poet at a very young age began writing poetry at an early age. When he was thirteen his work began publishing in the local newspaper. While at school Neruda was a shy boy but he read voraciously. He was encouraged by the principal of the Temuco Girls’ School, Gabriela Mistral, who herself was a gifted poet and who later become a Nobel laureate. He started using his pseudonym, Pablo Neruda from the age of sixteen and achieved fame as a journalist, poet, and writer of prose. In 1921, he moved to Santiago to further his writing career where published his first book, titled Crepusculario, using his own money. Neruda’s most well known and most popular work was Veinte Poemas de amor y una cancion desesperada, which translates into Twenty Poems of Love (Poema 20 Pablo Neruda) and a Song of Despair. Neruda legally adopted his pseudonym in 1946.

4. While Neruda achieved more fame internationally than he did in his native Chile, he did not make enough money to subsidize his living. Because of poverty, Neruda was forced to accept a position as an honorary consul in Ragoon. This was a blessing in disguise as it opened the way for him to become more involved in politics for many years to come. Politics not only earned Neruda the money to continue writing poetry, but it also gave him inspiration.

5. Neruda also spent time traveling to different countries like Burma, Ceylon, Java, Barcelona, Java, Singapore, and Madrid, to represent Chile. During this period, he amongst many of his great works included the great collection of poems, Residencia en la Tierra. This was the period when he wrote some of his more unorthodox and mysterious poetry.

6. Neruda married three times, first in 1930 to Maria Antonieta Haagenaar, with whom he had little in common. They separated in 1936, after the birth of their daughter, born prematurely with Down’s syndrome. He next met Delia del Carril, an Argentine painter twenty years his senior who shared his Marxist beliefs. Neruda married del Carril a year later. Matilde Urrutia was the love of Pablo Neruda’s life as they were both from Chile and shared common roots. He married her in 1966.

7. Because of his communist ideology, Neruda also had to go into exile. Later he became the target of political vendetta under the Pinochet government in 1973 when the democratically elected government of President Salvador Allende was toppled in a military coup. His house on the Chilean coast was raided and Neruda, aged 69 years, died of heart failure in September of that year.

8. Pablo Neruda during his long literary career produced many great works including epic poems, political manifestos, and prose. However, among his works, his love poems were most famous. Neruda won the Nobel Prize for literature in 1971.

The Three Houses of Pablo Neruda in Chile

9. During his lifetime, Pablo Neruda maintained three houses in central Chile, called La Chascona, La Sebastiana, and Isla Negra. Today these have been renovated and converted into tourist attractions. One can visit them in order to gain insight not into the life of this great poet but also into the history of Chile.

Here are Some of the Best Pablo Neruda Love Quotes 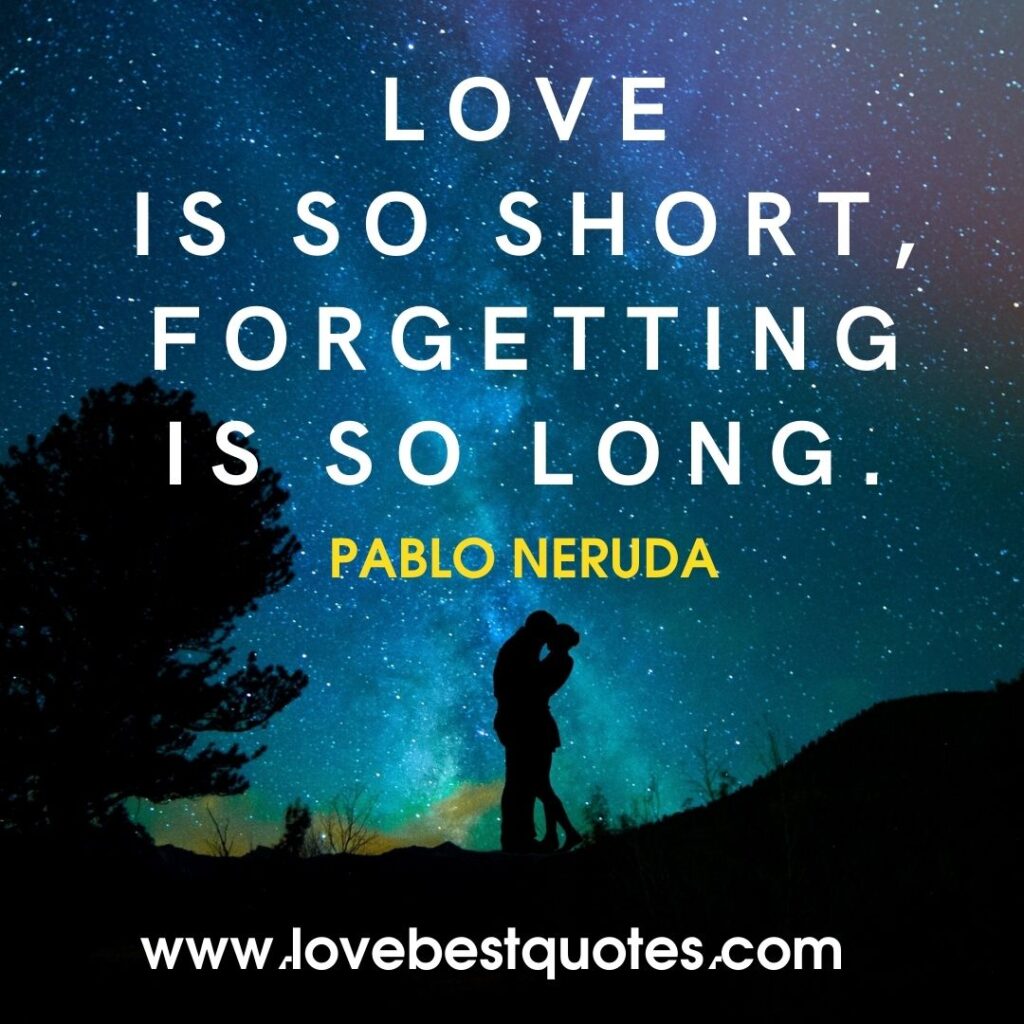 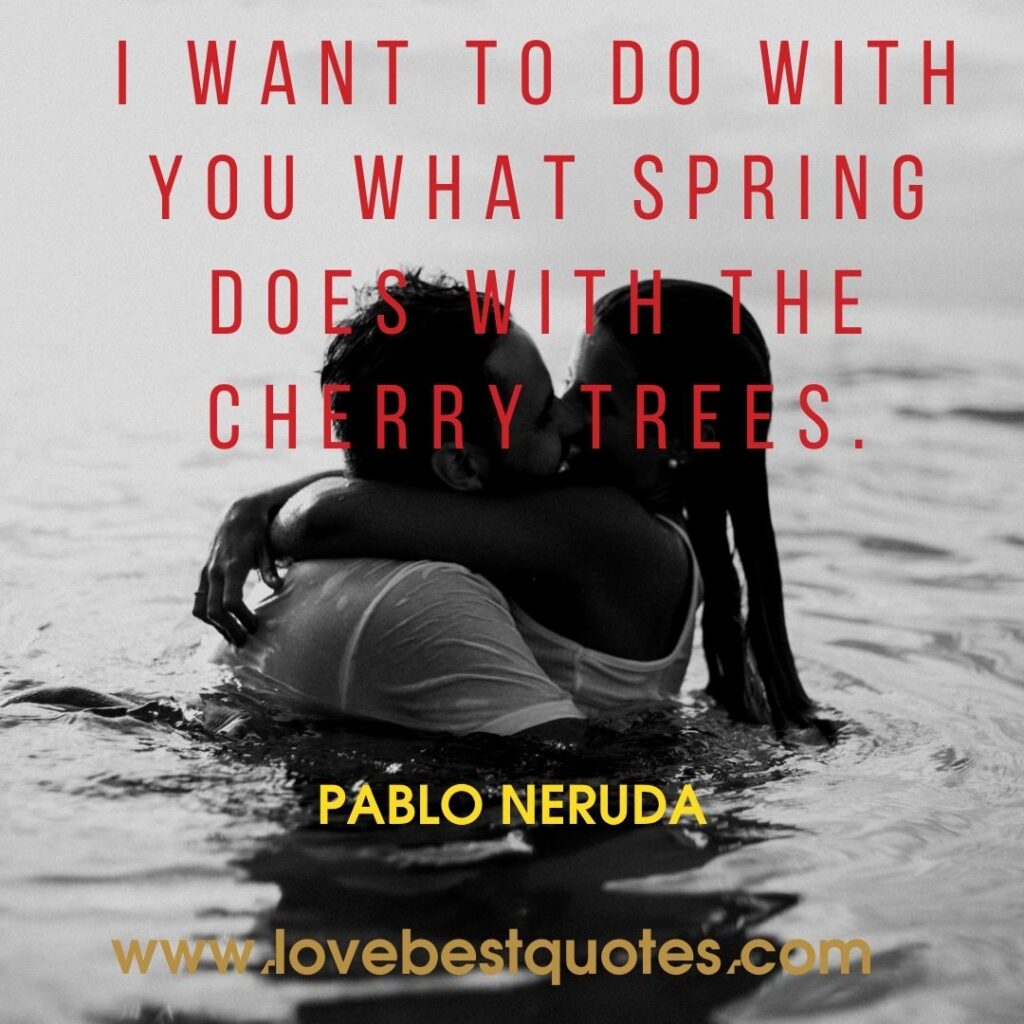 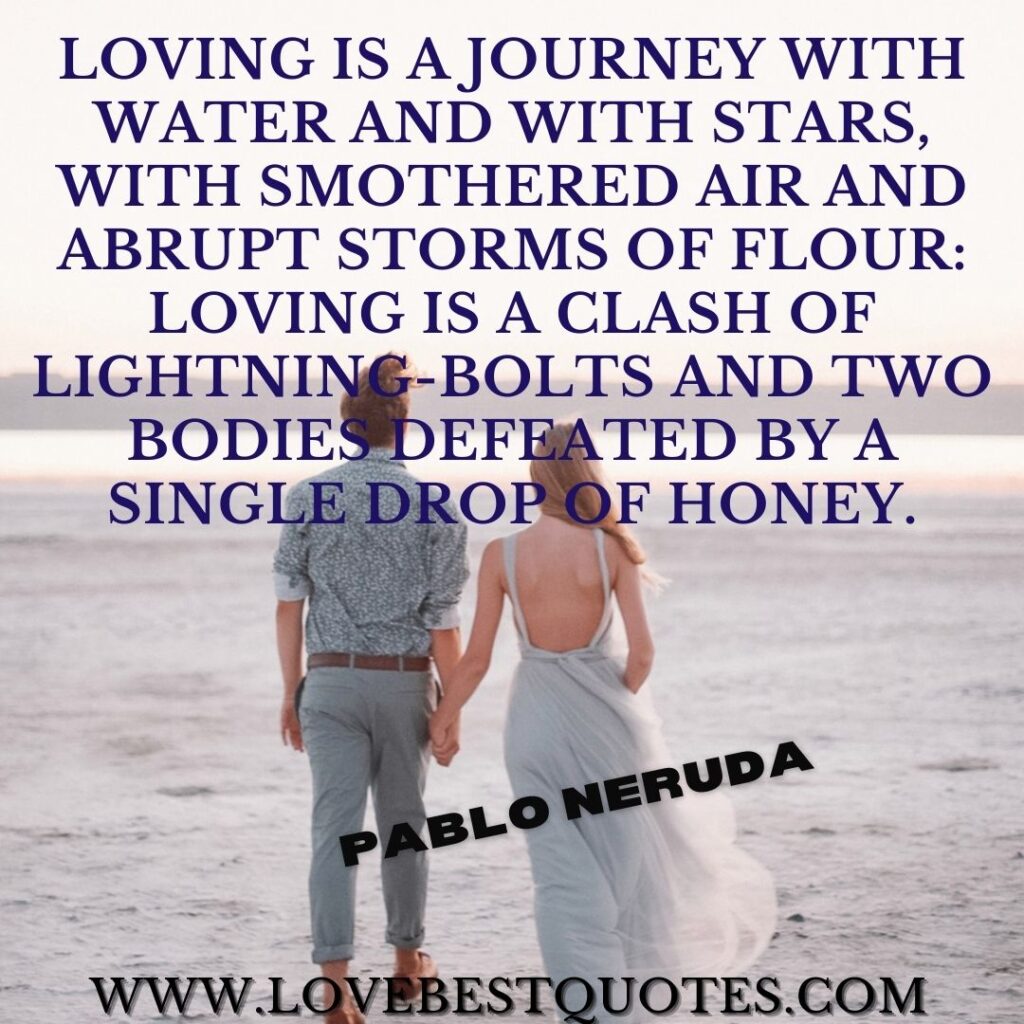 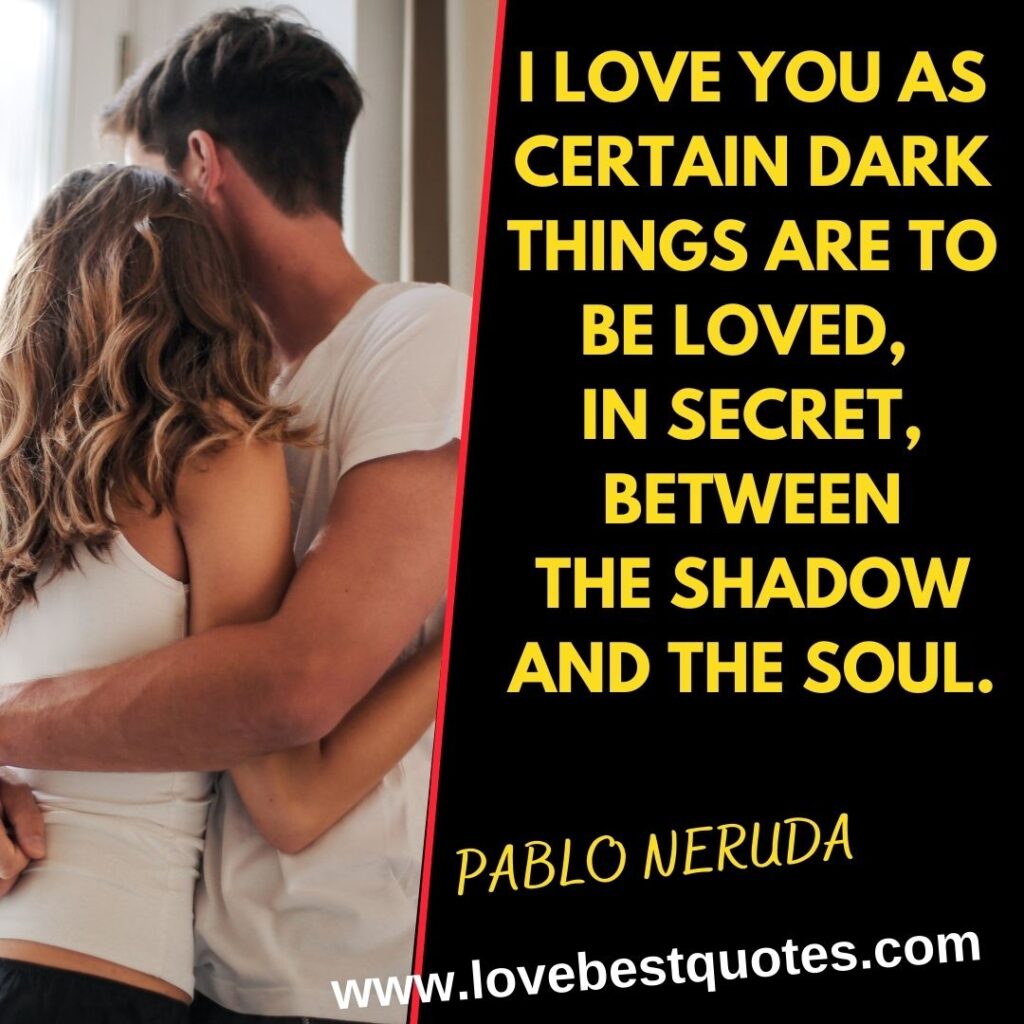 DENY ME BREAD, AIR, LIGHT, SPRING, BUT NEVER YOUR LAUGHTER FOR I WOULD DIE.

ONLY A BURNING PATIENCE WILL LEAD TO THE ATTAINMENT OF A SPLENDID HAPPINESS.

LAUGHTER IS THE LANGUAGE OF THE SOUL.

YOU CAN CUT ALL THE FLOWERS BUT YOU CANNOT KEEP SPRING FROM COMING.

If You Forget Me Pablo Neruda.

Pablo Neruda wrote this beautiful poem while he was away from Chile in exile for his view on communism. He was at this time having an affair with Matilde Urrutia and it is presumed that presumed that the poem was written, keeping Matilde in mind. Through this poem Pablo expresses his feelings for her. Here is the poem.

I want you to know one thing. You know how this is, if I look at the crystal moon, at the red branch
of the slow autumn at my window, if I touch near the fire the impalpable ash
or the wrinkled body of the log, everything carries me to you, as if everything that exists,
aromas, light, metals, were little boats that sail toward those isles of yours that wait for me. Well, now, if little by little you stop loving me
I shall stop loving you little by little. If suddenly you forget me
do not look for me,
for I shall already have forgotten you. If you think it long and mad,
the wind of banners
that passes through my life,  and you decide to leave me at the shore
of the heart where I have roots, remember that on that day, at that hour, I shall lift my arms
and my roots will set off to seek another land. But if each day, each hour, you feel that you are destined for me
with implacable sweetness,
if each day a flower climbs up to your lips to seek me,
ah my love, ah my own, in me all that fire is repeated, in me nothing is extinguished or forgotten,
my love feeds on your love, beloved,
and as long as you live it will be in your arms
without leaving mine.

There are many poems written by Pablo Neruda in Spanish. One beautiful poem is ‘Me Gustas Cuando Callas’

I like for you to be still: it is as though you were absent,and you hear me from far away and my voice does not touch you. It seems as though your eyes had flown away and it seems that a kiss had sealed your mouth.

I like for you to be still, and you seem far away.It sounds as though you were lamenting, a butterfly cooing like a dove. And you hear me from far away, and my voice does not reach you:Let me come to be still in your silence.

And let me talk to you with your silence that is bright as a lamp, simple as a ring. You are like the night, with its stillness and constellations. Your silence is that of a star, as remote and candid.

I like for you to be still: it is as though you were absent,distant and full of sorrow as though you had died. One word then, one smile, is enough. And I am happy, happy that it’s not true.

“Shyness is a condition alien to the heart, a category, a dimension that leads to loneliness.”

“There is a certain pleasure in madness, which only the madman knows.”

“You are free to make the options you want, but you are a prisoner of their consequences.”

“A shadow is always black, nem that looks like a white swan.”