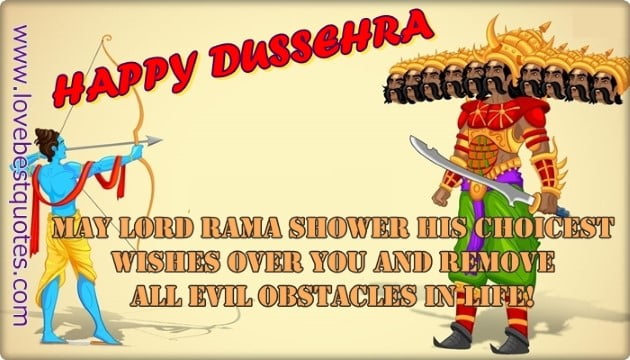 Vijayadasami, popularly known is a major Indian festival celebrated all over the country.  The festivities last for 10 days and the Dussehra the culmination of the festival. It is also referred to as Navaratri.  The main theme of the festival, as in most cases, is the victory of Good over Evil.

Why do we Celebrate Dussehra

Dussehra is one of the major Hindu festivals. It is celebrated because Ravana, the demon king had kidnapped Sita the wife of Lord Rama, and kept her in captivity.   Lord Rama killed the demon king Ravana after a 9 day battle and freed his wife, Goddess Sita.

Why is Navratri Celebrated

The nine-day festival of Navaratri also comes to a close on the day of Vijayadasami. It is in celebration of the victory of Goddess Durga, also known as Mahishasura Mardini, who defeated the buffalo demon Mahishasura. This event is believed to have taken place close to today’s Mysore in the state of Karnataka.

There is another legend associated with this festival. It is in the Mahabharata. Having lost the dice game, Pandavas were banished by the Kauravas for 12 years. They lived in the forest during that period. There was the stipulation that they had to remain incognito during that period and in case they were found, they had to spend another 12 years in the forests. At that time, in order not to get exposed, they had to lay aside their divine and powerful weapons. They concealed their weapons in a ‘shami’ tree close to the place of their residence. At the end of every year, they came to the ‘shami’ tree and found their weaponry intact, worshipped the tree and Goddess Durga, the presiding deity.

The Kauravas were making every attempt to trace Pandavas so that they could be sent away to the forests once again. By the time Kauravas found them, it was past the stipulated time and Pandavas went to the ‘shami’ tree, collected their weapons, and went straight to the battlefield to fight the Kauravas. The day these events take place is Dashami (tenth day) and as the Pandavas were victorious, it was also referred to as Vijayadasami. The word ‘Vijaya’ in Sanskrit means victory. It is for this reason that people exchange leaves from the shami tree and hug each other on the day of Vijayadasami.

Dussehra is celebrated in different ways throughout the length and breadth of the country.  While Dussehra of Kullu is very famous, Dussehra of states like Chhatisgarh, West Bengal, and Tripura are also very popular too. Durga Puja is another festival celebrated during these days in Eastern, Southern, and other parts of the country.  Durga Puja is celebrated in remembering goddess Durga’s victory over the buffalo demon Mahishasura to restore and protect dharma. The celebrations include processions to a river or ocean front that carry clay statues of Durga, Lakshmi, Saraswati, Ganesha, and Kartikeya, accompanied by music and chants.  After prayer and seeking blessings the idols are immersed into the water for dissolution.

In many parts of the country, the festival is synonymously called Dussehra (also spelled Dasara, Dashehara).  The 10-day Dussehra festival is in celebration of the victory of Lord Rama, prince of Ayodhya over Ravana, the king of Lanka. Ravana abducted Sita, the wife of Rama, and held her captive in Lanka. Lord Rama, with the help of Hanuman, Sugreeva, the monkey king of Kishkindha, builds a bridge over the sea and travels to Lanka and kills Ravana in the ensuing battle and takes Sita back with him.

Whose Effigies are burnt on Dussehra

On the occasion of Dussehra, towering effigies of Ravan symbolizing the evil are also burnt with fireworks marking evil’s destruction. The festival also starts the preparation for one of the most important and widely celebrated Diwali, the festival of lights, which is celebrated twenty days after the composite of two words “Vijaya” (विजय) and “Dashami” (दशमी), which respectively mean “victory” and “tenth,” connoting the festival on the tenth day celebrating the victory of good over evil.

On Vijayadasami day, people also worship their weapons as it is supposed to be the most auspicious day to do so.  During the “ayudha pooja and vijayadashami”, the tools, equipments and instruments that people use to carry out their respective trades and occupations are worshipped as it is these equipments and tools that provide livelihood and bring prosperity to the people and society. People also decorate their houses, streets and wear new clothes, and exchange greetings. It is also the time to exchange gifts in a big way. Companies and businesses declare bonuses to their employees during this period. People also regard this festival as an auspicious occasion to start new ventures in any field. 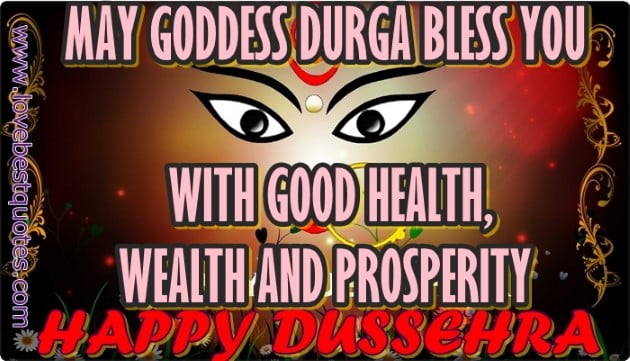