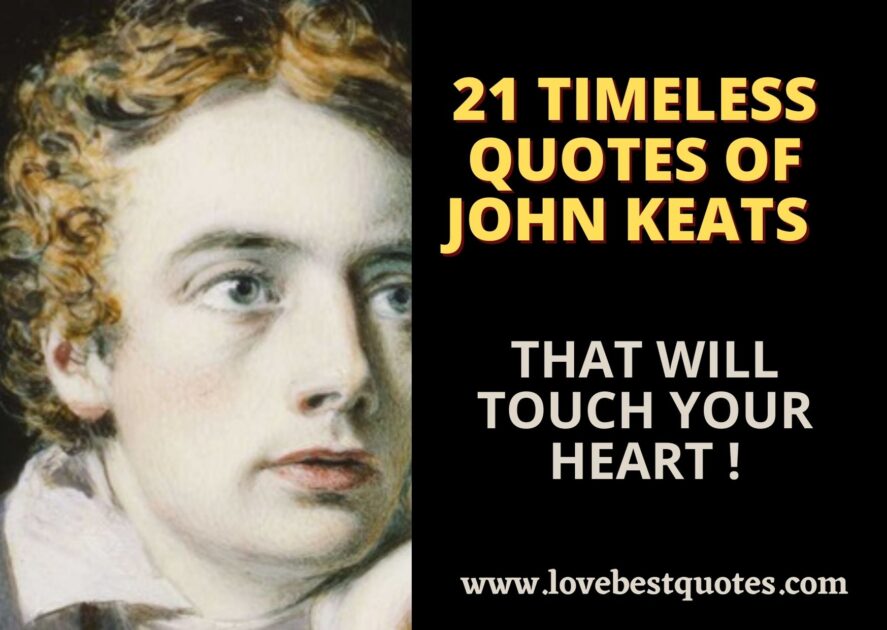 When we think of the great romantic poets of English Literature, the name of John Keats, comes foremost to our minds. He is the finest flower of the Romantic Movement and is a deeply revered English Poet whose short life spanned just 25 years. His verses present subtle imagery and a fusion of different sensations that, time and again, has produced musical effects, he being a rather conscious artist. John Keats, the great poet was born on October 31, 1795, in London, England. His parents were Thomas and Frances Keats and he was the eldest of his siblings of four. Keats lost his father very early when his father, a livery stable keeper, was killed after being trampled by a horse. John was only 8 years at that time.

The death of his father had a very adverse effect on the family as it greatly disrupted the family’s financial security. His mother Frances took a series of wrong decisions, she quickly remarried and just as quickly lost a good portion of the family’s wealth. Her second marriage fell apart and she left her family, leaving her children in the care of her mother. Though she eventually returned back to her children, her life was in tatters. She died of tuberculosis in 1810.

During such turbulent childhood, John Keats found solace and comfort in art and literature. In fact, these adverse circumstances shaped Keats’s understanding of the human condition, it’s suffering, and loss. Those hard and difficult times, helped ground Keats’ later poetry one that found its beauty and grandeur from the human experience.

He was enrolled at the Enfield Academy School, shortly before his father’s passing. Keats proved to be a voracious reader here and he also became close to the school’s headmaster, John Clarke, who served as a sort of father figure to the orphaned student. This encouraged Keats’ interest in literature. In the year 1810, Keats left Enfield Academy school for studies to become a surgeon. He studied medicine at a London hospital and eventually became a licensed apothecary in 1816.

John Keats studied different great poets and writers of the ages like Spenser, Homer, and Renaissance poets. It is said that he was unlucky in love as his beloved deceived him. This engulfed him in pain and dejection and he turned his face away from reality. He turned to and loved beauty in all forms. He composed sonnets, odes, and a legendary tale of the mythical lovers, Endymion and Phoebe. All of his odes, especially Ode to Nightingale, Ode to Grecian Urn are brilliant and hold an eminent place in English literature. In the early part of his career, the influence of Edmund Spenser was instrumental in awakening his imaginative genius; whereas in the later years, the influence of Shakespeare, Milton, and even Wordsworth can be seen in his poems. Those were the days of the Romantic era, as history says when almost the entire Europe was intensely shaken by the ideas and ideologies of the French Revolution. All the major poets of that period were greatly inspired by the personal and political liberty of the revolution, which broke the bonds of the artistic conventions of the 18th century. Keats on the other hand, was, however, distinguished from his contemporary poets and literary figures as the excitement and the turmoil of the revolution were not directly represented in his poetry. His poetry was an embodiment of his vision of beauty that he saw everywhere in nature, in art, inhuman deeds of chivalry, and also in the fascinating tales of ancient Greece. In fact, he expressed all this most emphatically in his ‘Ode on a Grecian Urn’.

Most Famous Works of John Keats

Throughout his journey as a poet, he strived to harmonize what scholars today say ‘the life of sensation with the life of thought’. Keats earlier yearning for the enjoyment of sensuous delights, as seen in his ‘Sleep and Poetry’, is later replaced by a strong yearning to subject himself persistently and unflinchingly, to the joy and beauty of life, accompanied by the inevitable pain, hopelessness, and despair of life. Though he wrote many sonnets and odes, his better-known works are ʻOde on a Grecian Urnʼ and ʻOde to a Nightingaleʼ.

How did John Keats Die

This great poet John Keats suffered a series of hemorrhages in 1820 and died at the very young age of 25 from tuberculosis.

Here we bring 21 Timeless Quotes  by John Keats that will Touch Your Heart.

DO YOU NOT SEE HOW NECESSARY A WORLD OF PAINS AND TROUBLES IS TO SCHOOL AN INTELLIGENCE AND MAKE IT A SOUL?

I AM CERTAIN OF NOTHING BUT THE HOLINESS OF THE HEART’S AFFECTIONS, AND THE TRUTH OF IMAGINATION.

NOTHING EVER BECOMES REAL UNTIL IT IS EXPERIENCED

I WAS NEVER AFRAID OF FAILURE; FOR I WOULD SOONER FAIL THAN NOT BE AMONG THE GREATEST.

TOUCH HAS A MEMORY. O SAY, LOVE, SAY, WHAT CAN I DO TO KILL IT AND BE FREE?

EVEN A PROVERB IS NO PROVERB UNTIL YOUR LIFE HAS ILLUSTRATED IT.

TWO SOULS WITH BUT A SINGLE THOUGHT. TWO HEARTS THAT BEAT AS ONE!

I ALMOST WISH WE WERE BUTTERFLIES AND LIV’D BUT THREE SUMMER DAYS THREE SUCH DAYS WITH YOU I COULD FILL WITH MORE DELIGHT THAN FIFTY COMMON YEARS COULD EVER CONTAIN.

POETRY SHOULD BE GREAT AND UNOBTRUSIVE, A THING WHICH ENTERS INTO ONE’S SOUL, AND DOES NOT STARTLE IT OR AMAZE IT WITH ITSELF, BUT WITH ITS SUBJECT !

I MUST CHOOSE BETWEEN DESPAIR AND ENERGY – I CHOOSE THE LATTER.

O FOR A LIFE OF SENSATIONS RATHER THAN OF THOUGHTS!

BEAUTY IS TRUTH, TRUTH BEAUTY, THAT IS ALL YE KNOW ON EARTH, AND ALL YE NEED TO KNOW.

THE EXCELLENCE OF EVERY ART IS ITS INTENSITY.

A THING OF BEAUTY IS A JOY FOREVER;

ITS LOVELINESS INCREASES; IT WILL NEVER PASS INTO NOTHINGNESS.

SCENERY IS FINE, BUT HUMAN NATURE IS FINER.

I HAVE HAD A THOUSAND KISSES, FOR WHICH WITH MY WHOLE SOUL I THANK LOVE !

I LOVE YOU THE MORE IN THAT I BELIEVE YOU HAD LIKED ME FOR MY OWN SAKE AND FOR NOTHING ELSE.

CAN DEATH BE SLEEP, WHEN LIFE IS BUT A DREAM, AND SCENES OF BLISS PASS AS A PHANTOM BY?

PLEASURE IS OFT A VISITANT; BUT PAIN CLINGS CRUELLY TO US !

THE POETRY OF THE EARTH IS NEVER DEAD. TIME, THAT AGED NURSE, ROCKED ME TO PATIENCE.

I WISH TO BELIEVE IN IMMORTALITY – I WISH TO LIVE WITH YOU FOREVER !