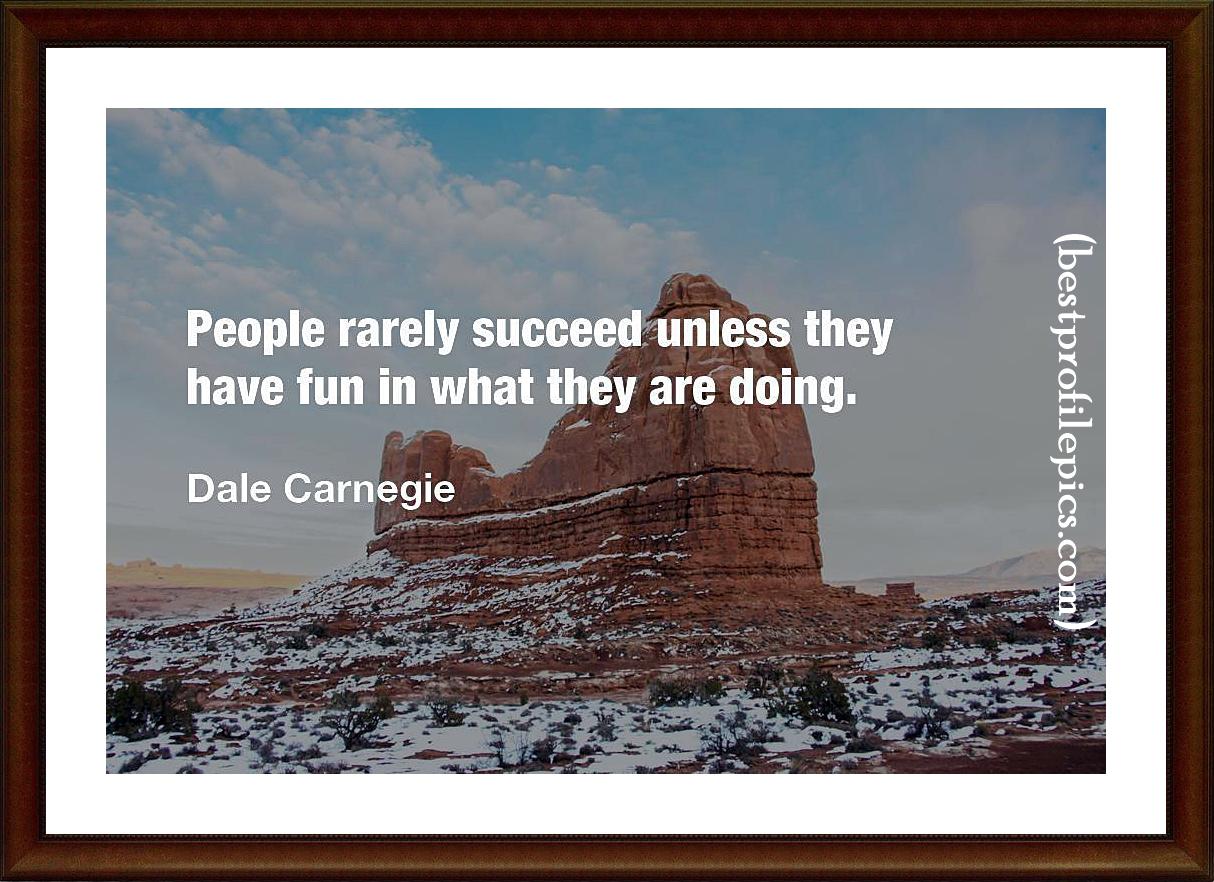 Dale Carnegie (Dale Breckenridge Carnegie) who was born in November 1888 and died in November 1955 was an famous American writer, lecturer and motivator. He was the author of many famous courses in self-improvement, salesmanship, corporate training, public speaking, and interpersonal skills.

He was the author of many best sellers like How to Win Friends and Influence People (1936), How to Stop Worrying and Start Living (1948), Lincoln the Unknown (1932) and several other books which remain popular and best sellers even today.

Here are some famous Inspirational and Motivational Dale Carnegie quotes.

“Criticism is dangerous, because it wounds a person’s precious pride, hurt his sense of importance and arouses resentment.” – Dale Carnegie

“Don’t be afraid to give your best to what seemingly are small jobs. Every time you conquer one it makes you that much stronger. If you do the little jobs well, the big ones tend to take care of themselves.” – Dale Carnegie

“Do the hard jobs first. The easy jobs will take care of themselves.” – Dale Carnegie

“Names are the sweetest, most important sound in any language.” – Dale Carnegie

“By fighting, you never get enough – but by yielding, you get more than you expected.” – Dale Carnegie

“The chronic kicker, even the most violent critic, will frequently soften and be subdued in the presence of a patient, sympathetic listener – a listener who will be silent while the irate fault-finder dilates like a king cobra and spews the poison out of his system.” – Dale Carnegie

“Actions speak louder than words, and a smile says, ‘I like you. You make me happy. I am glad to see you.’” – Dale Carnegie

“Take a chance! All life is a chance. The man who goes furthest is generally the one who is willing to do and dare.” – Dale Carnegie

“Inaction breeds doubt and fear. Action breeds confidence and courage. If you want to conquer fear, do not sit home and think about it. Go out and get busy.” – Dale Carnegie

“Arouse in the other person an eager want. He who can do this has the whole world with him. He who cannot walks a lonely way.” – Dale Carnegie

“Today is life; the only life you are sure of. Make the most of today. Get interested in something. Shake yourself awake. Develop a hobby. Let the winds of enthusiasm sweep through you. Live today with gusto.” – Dale Carnegie

“Most of the important things in the world have been accomplished by people who have kept on trying when there seemed to be no help at all.”  – Dale Carnegie

“People rarely succeed unless they have fun in what they are doing.” – Dale Carnegie

“Don’t be afraid of enemies who attack you. Be afraid of the friends who flatter you.” – Dale Carnegie

“If you can’t sleep, then get up and do something instead of lying there and worrying. It’s the worry that gets you, not the loss of sleep.” – Dale Carnegie

“Develop Success from Failures.  Discouragement and Failures are two of the surest stepping stones to success” – Dale Carnegie

“It isn’t what you have or who you are or where you are or what you are doing that makes you happy or unhappy. It is what you think about it.” – Dale Carnegie

“I have come to the conclusion that there is only one way under high heaven to get the best of an argument – and that is to avoid it. Avoid it as you would avoid rattlesnakes and earthquakes.” – Dale Carnegie

“If you want to conquer fear don’t sit home and think about it; Go out and Get Busy” – Dale Carnegie

“If you believe in what you are doing, then let nothing hold you up in your work. Much of the best work of the world has been done against seeming impossibilities. The thing is to get the work done.” – Dale Carnegie

“all of us tend to put off living. We are all dreaming of some magical rose garden over the horizon – instead of enjoying the roses that are blooming outside our windows today.” – Dale Carnegie